On January 1, 2020, Illinois became the 11th state to legalize recreational marijuana. Throughout the course of the first day, sales topped $3.2 million dollars. Eager customer swarmed dispensaries to be among the first in the state to legally purchase cannabis products. Undoubtedly, this also brought increased revenue to surrounding businesses – including restaurants that worked with dispensaries. Given long lines and cold temperatures, they provided a more comfortable waiting area to customers.

Opening day in Illinois once more shows the potential impact that legalization can have on local and state economies. However, some restrictions are still in place regarding purchasing and use of cannabis in Illinois. Until later this year, only medical marijuana dispensaries can sell recreational marijuana. Furthermore, customers must be over the age of 21 to purchase and consume. They can only possess up to 30 grams of flower or five grams of concentrate containing 500 milligrams of THC within edible products or tinctures.

How Does Illinois Compare?

Illinois’ major sales run on their first day of legalization mirrors similar situations in other states. Oregon also sold $3.2 million in marijuana products on their first day, leading to a first week of $11 million. Massachusetts and Michigan both saw more conservative numbers – $440,000 and $221,000 respectively. 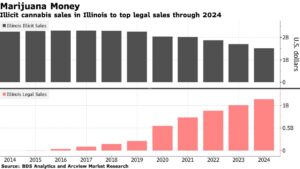 Colorado, the first state to legalize marijuana, earned $1 million on their first day of sales. Perhaps more importantly, they also earned over $1 billion in tax revenue alone throughout the course of their first five years of recreational cannabis sales. That is a staggering amount of tax revenue and one of the strongest incentives for further states to legalize.

Legalization Movement: On the Horizon

Although full legalization efforts have stalled in some states, the initiative continues to expand. Minnesota will vote on a bill this February with similar guidelines as Illinois. Medical marijuana laws are much more widespread, with 33 states allowing for its use. Any number of these states could use 2020 to push for full recreational legalization.

The federal government’s legalization outlook remains harder to gauge. Legalization – or even decriminalization – will depend on how the 2020 election proceeds. A continued Republican majority in the Senate almost ensures that marijuana legalization will not gain any ground. Conversely, should the Democrats make major strides, legalization could be on the near horizon.

What to expect when Grubhub (GRUB) reports Q3 results?

Do we still have to wonder why Metro Manila traffic can be solved?

Jushi Holdings Is Putting A Stranglehold On A Key U.S. Cannabis Market

Now that the fall season is approaching, we are closely monitoring how the cannabis sector closes out the year. During the last few months, leading cannabis companies have been reporting increasing revenues. Jushi Holdings Inc. (NEO: JUSH.B) (OTCQX: JUSHF) is a leading US cannabis retailer that has been nothing short of an execution story and this…