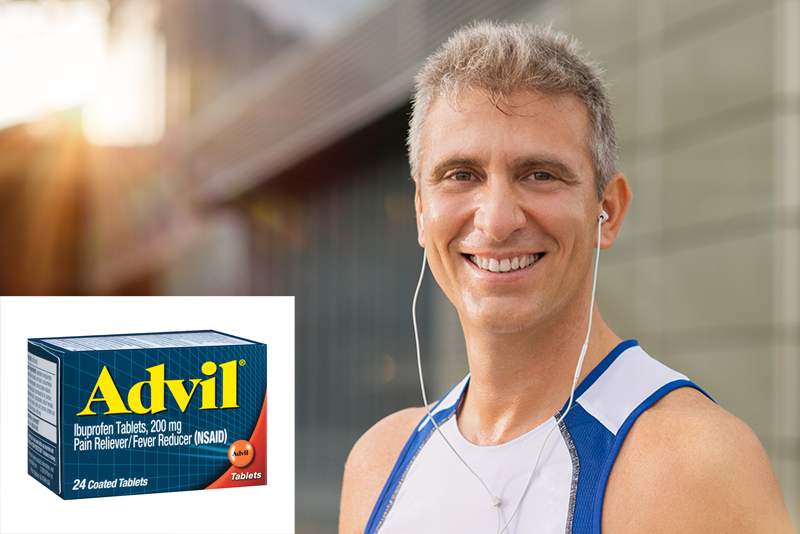 A local runner outwitted his own body’s natural defenses today with his decision to short-circuit its early warning system.

“This can’t possibly go wrong,” said Martin Van Buren, 52, as he prepared to ingest over-the-counter ibuprofen before a 10-mile run. “The bottle says to take one tablet every four to six hours, but I’ll take two because that will be twice as good.”

Van Buren, who has been running for nearly a decade, has a long history of injury, most recently a nagging severe pain in his left calf.

Ibuprofen, a nonsteroidal anti-inflammatory drug (NSAID), reduces pain and inflammation, both of which are important indicators of current or impending damage. It works, according to MedicalNewsToday, “by blocking the production of prostaglandins, substances that the body releases in response to illness and injury.”

“If I can’t feel pain, I can’t get hurt,” Van Buren said, swallowing the tablets with a glass of water. “That’s just logic.”

Van Buren is not a trained logician.

“You know what, maybe I should take the rest with me,” Van Buren said, tucking the bottle into a waist pack before heading out the door. “Just in case.”

In related news, Van Buren planned later today to replace the duct tape over his car’s Check Engine light, which has been on for six months.

Cannabis Stocks Are Down: Here’s Why That’s Great for ETF Investors

Earnings preview: 3 metrics that could seal JCPenney’s fate in Q2

The Coronavirus outbreak has halted the operation of global businesses, schools and the cannabis industry. Cases of coronavirus have been confirmed in all 50 U.S. states. Health scares – combined with the fact that supply is running short, due to China’s factories closing temporarily – has caused pot stocks to plummet. However, Arkansas’ medical cannabis industry doesn’t…
Michigan, US
clear sky
31.2 ° F
35.6 °
28.4 °
92 %
1.2mph
1 %
Thu
52 °
Fri
58 °
Sat
50 °
Sun
55 °
Mon
44 °

Five of the most significant medical cannabis research studies ever conducted

Thousands of years ago, cannabis was used by humankind for the very first time. Scientists recently discovered that the plant’s psychoactive properties were formerly enjoyed by our ancient Chinese ancestors in the Tibetan Plateau. Prior to prohibition being effectuated in the 1930s amidst the “Reefer Madness” propaganda that was circulating at the time, pharmacists once stocked…

Welcome to Technical420! Today, we are fortunate to have Ian Parker, CEO of Emerald Organic Products Inc. (EMOR), join us to discuss what he is seeing in the cannabis industry. Ian is the CEO of an emerging CBD company that has been focused on making accretive acquisitions and this is an opportunity that we are…