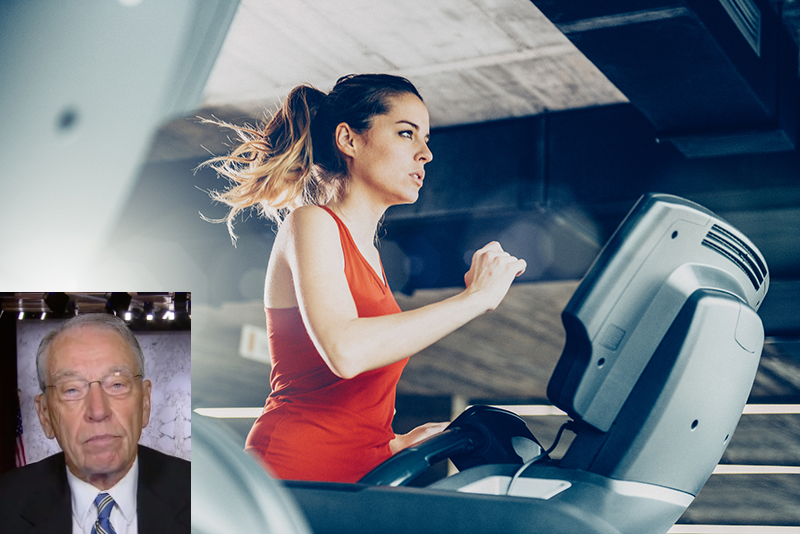 A local woman “blew off some steam” at the gym late today by running six hard miles on a treadmill and imagining that its belt was the face of U.S. Senator Chuck Grassley.

“I spent most of Thursday and a lot of (Friday) literally screaming at my phone, my laptop, and my TV,” said the woman, who identified herself only as Diana. “So, yeah. I’ve been pretty f***ing furious.”

The source of her rage, Diana explained, was the U.S. Senate Judiciary Committee and its hearings on allegations of sexual assault against Supreme Court nominee Brett Kavanaugh. The hearings were marked by contentiousness and partisan anger.

Grassley, a Republican from Iowa, is chairman of the Judiciary Committee.

“My original plan was to do a few easy miles,” said Diana. “Then I got on the treadmill and started thinking about (the hearings) and my pace crept up.”

Within minutes, she said, she noticed that a television facing her treadmill was playing a clip from the Kavanaugh hearings. When Grassley’s face appeared on screen, she said, “I lost it.”

“I glanced down at the treadmill’s belt and saw (Grassley’s) stupid f***ing face,” she said. “And I just started pounding.”

“I’ve never run that fast for that far before,” she said. “Man. It felt good.”

Despite her unplanned Friday evening workout, Diana said, she planned to return to the gym early Saturday morning—for a kickboxing class.

get our f***ing newsletter

The Race For Canadian Cannabis Retail Dominance Is On

Canopy Growth (TSX:WEED) Stock Price: Should You Buy the Bounce?

It all ads up: from first-year to the workforce

CannTrust Holdings Inc. (TSX: TRST, NYSE: CTST) announced that it received late this morning a Notice of Licence Suspension under section 64(1) of the Cannabis Act (Canada). The Notice cites the Company’s previous non-compliance with certain requirements of the Cannabis Act (Canada) and the regulation made thereunder (the “Cannabis regulations”) in respect of the matters…

Cannabis firm Cronos Group (TSX:CRON)(NASDAQ:CRON) reported its third-quarter financial results on Wednesday this week and management has announced some significant changes to the business. Investors need be aware of the following fundamental changes to the company’s future operations and financial results presentations going forward. Here’s what you need to know. Big change in applicable accounting…

Michael J. Holtzman, MD, has received close to $7.5 million in total funding for research aimed at developing stem cell-based treatments for chronic obstructive pulmonary disease (COPD), asthma, and other disorders. Holtzman’s research at Washington University School of Medicine in St. Louis identified a subset of stem cells — cells that are able to grow into…