Check out all video items on our Youtube channel

No better way to find out what’s happening in the industrial hemp sector and the booming CBD trade than to visit the oldest and biggest industrial hemp conference in the world, the EIHA in Cologne, Germany. One of the main takeaways from the record-breaking 16th edition is the need for the European hemp industry to strengthen their lobby for better laws and regulations.

organized by the German Nova Institute and the European Industrial Hemp Association, has been growing along with the hemp industry. On June 5th and 6th 2019 some 400 participants from 46 countries across the globe attended the 16th edition. EIHA is an acronym for European Industrial Hemp Association. It was established in 2005 to give the hemp industry a voice at the European Union in Brussels. The Nova Institute, led by Michael Carus, has been researching hemp since the nineties. 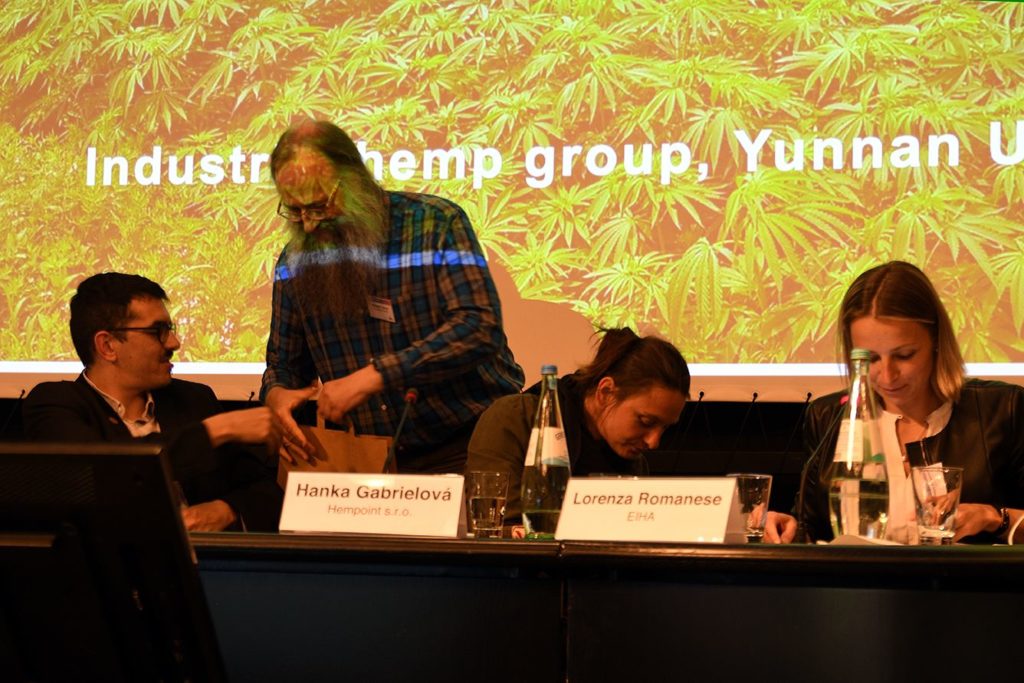 Carus stole the show during the dinner buffet on the first night, dressed in a cannabis leaf suit and bright pink ruffle tuxedo shirt. He and his team succeeded in putting together a comprehensive two-day program with a dazzling array of expert speakers.

For the second time, the innovation award “Hemp Product of the Year” has been granted to the young, innovative hemp industry for finding suitable applications and markets for industrial hemp-based products.

With BioLite, Trifilon offers a green alternative to plastics.

BioLite is a polypropylene reinforced with 30% hemp fibers. Hemp is one of the strongest natural fibers in the world, which makes BioLite products strong, light and durable. The use of hemp fibers in BioLite optimises the material properties for many applications – the high-quality trolley case is just one example. This technology gives manufacturers the opportunity to make sensible use of renewable raw materials, and an excellent one is hemp. The new material is suitable for lightweight automotive construction and consumer goods. http://www.trifilon.com

Mark Reinders, CEO of Europe’s oldest hemp company HempFlax, looked back at 25 years of innovation. Ben Dronkers, founder of HempFlax and cofounder of the EIHA, was also present.

It’s no secret that HempFlax suffered major losses in their early, pioneering years, but those days have gone. Hemp is booming. Take the number of hectares of industrial hemp in Europe, growing from 8,000 in 2011, to 33,000 in 2015 and 47,000 in 2017. Key drivers behind this rapid growth are hemp seeds going mainstream as a food ingredient, use of hemp fibers in the car and building industries and most importantly: the global breakthrough of cannabidiol (CBD), a cannabinoid that can be extracted from industrial hemp flowers.

The hemp plant can benefit mankind and planet earth in countless ways: it can feed us, clothe us and heal us, it can clean our soil, replace most of our plastic and we can use it to build our homes and even as fuel. Ted Haney of the Canadian Hemp Trade Alliance spoke of ‘the four faces of hemp: food, feed, fiber and fractions’, with fractions referring to cannabinoid extraction. Canada now grows about 40,000 hectares of hemp but Haney expects an expansion to 182,000 ha over the next five years. 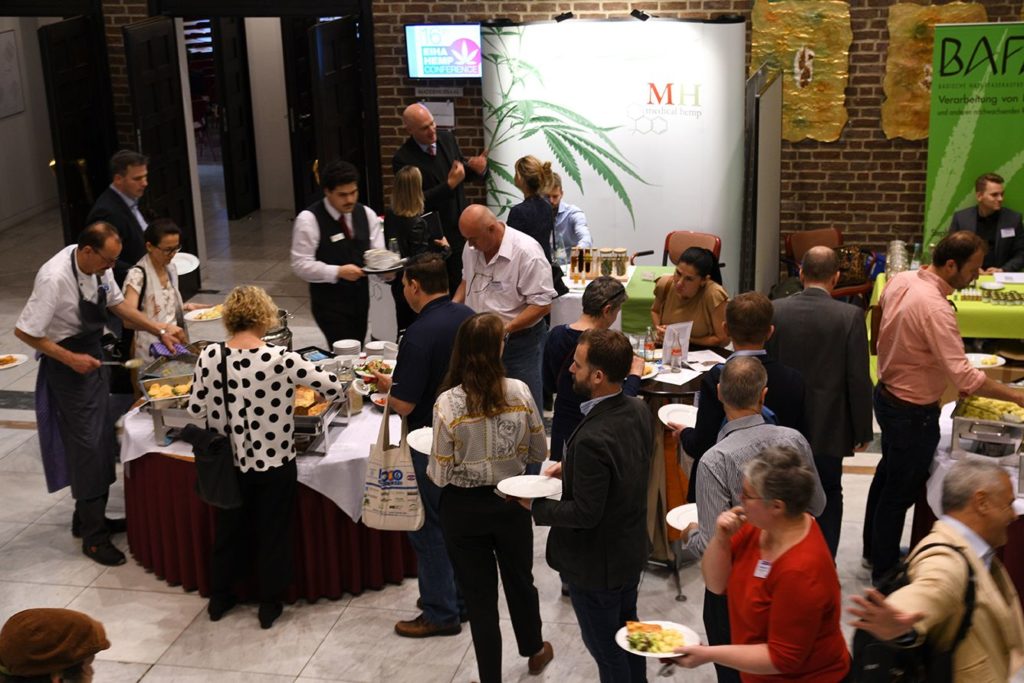 No country has grown hemp longer than China. Professor Fei-Hu Liu of Yunnan University told the audience that Yunnan Province is now the world’s largest producer of CBD. Most of the hemp grown in China today is used to source CBD. Two other major hemp producers are Canada, that re-established the hemp industry in 1998 and the US, where Congress legalized hemp in the Agricultural Improvement Act of 2018. Southeast Asia is jumping on the hemp bandwagon too: Thailand legalized hemp in 2013 and is working on legalizing medicinal cannabis. Malaysia might beat them to it, as the South China Morning Post [https://www.scmp.com/week-asia/society/article/2172531/green-gold-rush-thailand-malaysia-race-legalise-medical-marijuana] recently reported.

And then there’s Europe,

where hemp production has traditionally been dominated by Eastern European countries like Estonia, Latvia, Bulgaria and the Czech Republic and to a lesser extent by France. Relevant historical fact: the Communists never banned industrial hemp. In recent decades, Italy and the Netherlands have become important hemp producers. Both countries share a history of hemp growing and processing stretching back for centuries.

Similar to the laws about cannabis, the rules and regulations around CBD in Europe are different from one country to the next. The Novel Food classification of concentrated CBD that the EU published in January 2019 has only added to the confusion and uncertainty. The EIHA is actively lobbying to get the Novel Food classification off the table or at least keep CBD products on the shelves during the registration process. Earlier this year, the EIHA  published extensive evidence contradicting the EU’s claim that hemp foods and hemp extracts -including CBD- were not available in Europe before 1997  http://eiha.org/media/2019/03/19-03-12_PAFF_WG_EIHA_Final_small.pdf

The Novel Food registration process could easily take two to three years. If the EU decides to ban sales of CBD products that have no registration, this would be disastrous for patients, consumers and companies in the EU. As Michael Carus explained in Cologne, Europe risks falling behind: “We really have some barriers for further growth in Europe, with the Novel Food directive and other things. This is very sad, because companies in Canada, the US and elsewhere can really go ahead, really grow. If we in Europe are ready in five years, with the right regulations, than we know who will have taken over the market.”

For now, the CBD market is “a global Wild West, a Gold rush, you name it”, in the words of Valentina Vaguengueim of the Canadian consultancy firm Cannabis Compliance Inc. This means opportunities for companies and farmers, but also risks. There’s a lot of money at stake and big players are getting involved.

‘Aurora is coming to Hemp’ proclaimed small posters at the conference; the Canadian cannabis giant was one of the main sponsors this year. Aurora recently bought Lithuanian company AgroPro, Europe’s biggest producer, processor, and supplier of hemp and hemp products and its sister company Borela [https://www.marketwatch.com/story/aurora-cannabis-buys-europes-biggest-hemp-producer-agropro-and-distributor-borela-2018-09-12].

The hemp industry is changing, as could be witnessed at the conference, where veterans and pioneers -no suits- mingled with young professionals -all suits- fresh out of business school. The venue, the catering and the tightly moderated tsunami of presentations and panel debates all lived up to the German reputation for Gründlichkeit (thoroughness). The event did what a good conference does: connect lots of people and spread a wealth of information, inspiration and news. 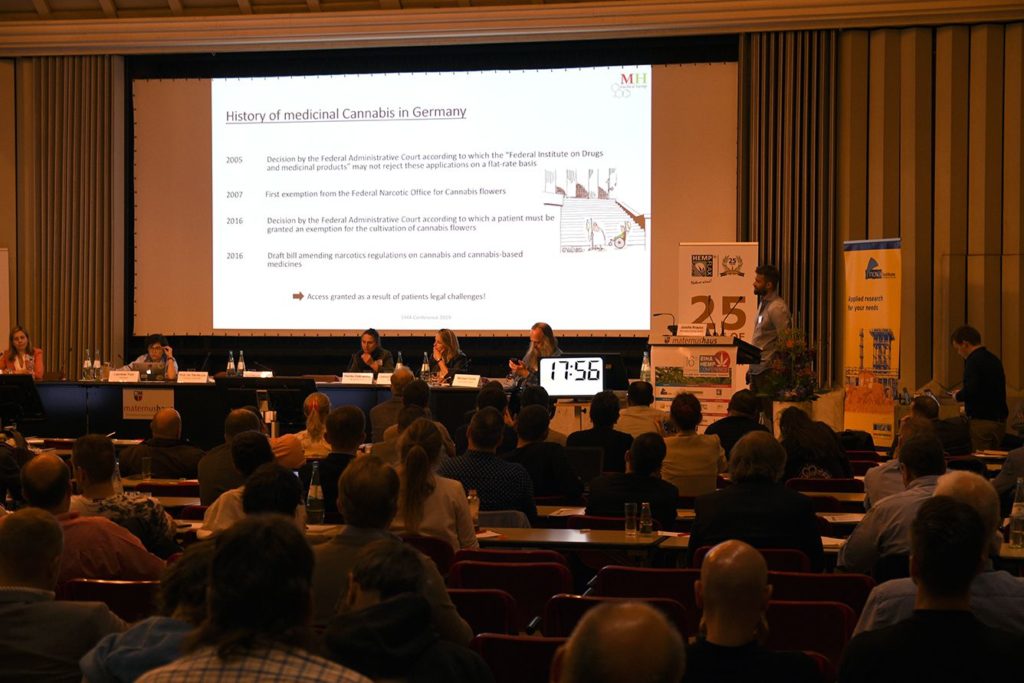 Laurène Tran of Harmony highlighted the French Kanavape case [https://medium.com/active-europe/france-needs-to-revise-its-hemp-regulations-if-it-wants-to-comply-with-eu-law-f53a65c42280]. Kanavape started selling CBD-products in 2014, sourced from legally grown Czech hemp plants. In October 2018, the Court of Appeal of Aix-en-Provence referred a preliminary question to the European Court of Justice about the case: are the French regulations around hemp and CBD compliant with EU law and the free movement of goods or not? This case could “unlock the French market”, Tran said. More news: Hempflax is going public and will issue shares at the London stock exchange later this year. Talking to Cannabis News Network, Ben Dronkers said: “I’m not a stock exchange person. It’s not my thing. But in the whole world you can see the big investment money is coming in. And cannabis needs it.”

What worries Dronkers is that the activists and the people who have worked with cannabis for decades prior to legalization are being left or even pushed out of the legal industry. Dronkers: “I really believe that cannabis is a medicine, it’s a beautiful plant, it’s food, it should grow in every garden. You should be able to grow your own medicine. If you have a plant in your garden, the stock market and the big companies can do what they want. I still believe in the soul, in the spirit of cannabis and that it should be for everybody. It should be totally legal.”

Text: Derrick Bergman
Video and tweets: Aleksi Hupli
Editing and social network: John Döpp / Melle van der Kolk
Producer/reporter: Steven Kompier
Derrick Bergman is a Dutch journalist, photographer, and activist who has been covering cannabis culture since 1994. He is one of the founders and current chairman of the VOC, the union for the abolition of cannabis prohibition (www.voc-nederland.org).

Electricity Production From The Urine Of Cannabis Consumers!

The Coronavirus outbreak has halted the operation of global businesses, schools and the cannabis industry. Cases of coronavirus have been confirmed in all 50 U.S. states. Health scares – combined with the fact that supply is running short, due to China’s factories closing temporarily – has caused pot stocks to plummet. However, Arkansas’ medical cannabis industry doesn’t…
Michigan, US
clear sky
57.5 ° F
63 °
50 °
14 %
0.8mph
1 %
Sat
52 °
Sun
53 °
Mon
54 °
Tue
57 °
Wed
53 °

Jodie Emery Quits Liberals and so should we