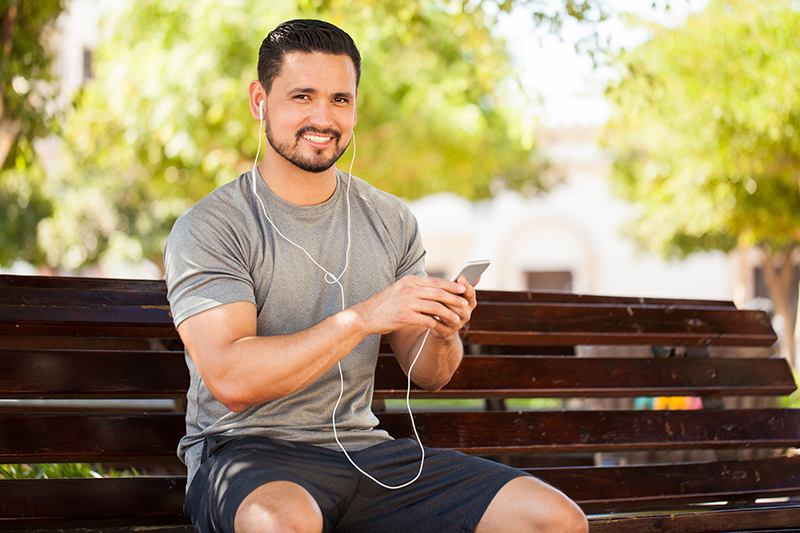 A local man who habitually runs while wearing earbuds has assured everyone that the practice poses no risk, because he keeps the volume at a “safe level.”

The same man regularly startles when he’s overtaken by fellow runners and walkers—even when they’ve made a conscious effort to alert him to their presence.

“I know you hear stories about runners getting hit by trains and stuff while wearing headphones or whatever, but, you know, I’m fine,” said Alex Trebek, 33. “I keep my volume at a safe level.”

“Dude was totally zoned out,” said Patrick Sajak, 25, a fellow runner who overtook Trebek during a recent run on a local path. “I was running just slightly faster than him, so it was pretty gradual that I passed him.”

“I sort of scuffed my feet as I got close, and cleared my throat, to let (Trebek) know I was behind him,” Sajak said, “but I guess he didn’t hear it. The moment I pulled alongside him, he leaped straight up, I swear, like three feet.”

Vanna White, 56, had a similar story.

“I saw (Trebek) last weekend, early Saturday morning,” said White, who was at a local park walking her dog. “He was stopped in the middle of the trail, wearing earbuds and looking at his phone, when I came up behind him. I said ‘good morning,’ but he must not have heard me, because he jumped pretty hard.”

“I apologized for scaring him,” she said, “but I don’t think he heard that, either.”

Asked how he can be sure he’s hearing everything around him when, by definition, he would be unaware of the things he can’t hear, Trebek paused and blinked several times.

“Well,” he responded, “because my volume is at a safe level.”

“I can’t run without my tunes!”

The Midwest Cannabis Industry Is A-Boomin

This Pot Stock Is Perfect for a TFSA

The U.S. Government Stops Cannabis Companies From Making A Donation

1933 Industries Provides an Update on its Nevada Hemp Processing Facility

Earlier this week, Netflix Inc. (NASDAQ: NFLX) reported healthy results for the final quarter of 2019 which topped market expectations. Revenue rose 31% coupled with a significant increase in profits. The number of paid members increased 20% to 167 million at the end of the period. The company also saw increases in average revenue per…

The Yield Growth Corp. (CSE: BOSS) (OTCQB: BOSQF) (FSE: YG3) is pleased to announce that its wholly owned subsidiary Flourish Mushroom Labs Inc. has completed the acquisition, announced on September 24, 2019, of a catalogue of mushroom formulas as the foundation of a mushroom edibles business. Cannot view this image? Visit: https://media.zenfs.com/en-us/newsfile_64/c4fbbc1476e639e21ba19510cc9d8fbd More Figure 1. Varieties…